This post has been burning inside of me for two months.

I think I’ve finally reached the point where I can’t hold it in any longer. I’m going thermonuclear over bad financial advice I saw on Twitter.

If you’re one of my blogger friends reading this, please scratch down a few kind words for a eulogy. (The nice thing about having blogger friends is that they know how to write).

Otherwise, if you’re just here for the fireworks, pull up a chair because it will be a doozie.

When I started blogging, I loved Twitter. It was where all of my blogger friends interacted with each other. Although I’m not a teacher, I imagined Twitter was like a teacher’s lounge. Where friends could take a break from the trenches of blogging and share stories and encourage each other.

Lately, I’ve noticed a lot of people trying to sell stuff on Twitter. Which is fine. If you want to sell stuff, sell it. I want people to be successful in their online business.

But also- like it’s weird (for me) to see people sell stuff on Twitter. Because- like, it’s the teacher’s lounge. It’s filled with other content creators. Are they really going to buy your product? I’m guessing there must be some people buying stuff because Twitter is now full of people selling stuff.

Me- I like to keep my Tweets delightfully weird:

I also keep my sanity by having a giant list of muted words (are people Tweeting about vaccines? I don’t know because Twitter magically hides them from me). Although, every once in a while, an online business Tweet makes it onto my timeline and I lose it.

So about 2 months ago, I stumbled upon this Tweet.

And oh my gosh. The responses and reasoning here bends my mind.

If you got a million dollars and lost half of it to taxes, you’d have $500,000. High yield savings accounts are currently paying 0.5% interest (with no risk, FDIC guaranteed). At that rate, you’d earn $208 per month. Forever. Assuming that you did indeed lose half to taxes and you never invested the money.

I get it though

I’m not completely unsympathetic to the hustle-culture presented in the Tweet. I have lots of side hustles: I monetize this blog, I help a brand promote their product, and I do freelance writing for clients. If someone offered me another $50 per month to invest into my business you better believe that I’d invest it in an Ahrefs subscription or hiring a writer once a year to write some killer content for me better than I could.

I want my business to grow just like I want everyone else’s online businesses to grow.

I just don’t want some financial n00b to come onto Twitter and think that they should take $50 a month when someone is offering you a one time payout of a million dollars because they saw an “expert” on Twitter say it was a good idea.

But I digress. What really made me lose my stack was a response about tomatoes.

This discussion about hustle culture and passive income got onto the topic of tomatoes.

And this Tweet is so bad that it’s good and so good that it’s bad again. I’ve been spending countless hours working through the math when I’ve been running or biking or gardening.

And it’s eating my soul so I’m going to math this sh-t out for all of you. (Don’t worry, I math out everything. Just ask people in my mastermind group. Yes. I am in a business mastermind. So don’t paint me as anti-side hustle in this argument. I’m anti-bad math).

So the most ironic part of this Tweet is that it starts with the phrase “You don’t understand scale” in reply to someone who was talking about taking the million dollars.

Let me tell you friends, anyone who thinks you can turn $50 into $3.9 million dollars growing tomatoes does not understand scale.

Ok. I’m just going to assume that you do buy tomato starts (instead of a seed packet) and that your tomato plants yield 25 tomatoes. That seems a little on the high side to me (my tomato plants all have less than 20 tomatoes), but whatever.

But the next step blows my mind. “Plant those into 250 plants”. Like, put the whole tomato in the ground? That’s not how this works.

Back before you could buy seeds at Walmart, our pioneer ancestors would save seeds from their harvest for next year. Saving seeds from tomatoes is a pain in the butt. Also, only certain varieties of tomatoes have seeds that are plantable. You can’t just buy a grocery store tomato and stick it in the ground and get fresh tomatoes.

A long time ago, I was obsessed with Green Zebra tomatoes. I gave one to my father-in-law and he was kind enough to save the seeds and plant them next year. But it took him a week to do it.

On the other hand, each tomato has about 200 seeds. So this is one area in which the math (though wrong) favors the original Tweeter. You compound much faster than he calculates (although there’s a lot of hidden work).

I am a simple gardener from the Midwest. I have no idea what would happen if you lived in a magical climate like San Diego. But here, you can only grow tomatoes once per year.

We start our seeds in March. On heated mats with grow lights. After Mother’s Day, we move them outside and can harvest tomatoes in August and September.

While it only takes 6 months to go from seed to tomato, you can’t do it in winter. I’m guessing that much of the US is the same way.

But since the tomatoes compound faster than originally stated, then we’re still back on turning $50 into 1.25 million tomatoes in 2 years.

So far, the math seems to check out. $50 for tomato plants, save the seeds, 1.25 million tomatoes.

Except, where are you going to plant 50,000 tomato plants in year two??

There’s no way you’re going to get 150 acres of farm land for free.

Obviously it doesn’t make sense to extrapolate community garden land rentals. Apparently, Wisconsin farmland near me rents for $183 per acre, so if you wanted to plant 156,000 tomatoes you’re looking at around $30,000).

And that’s assuming that you have unlimited free water and you never fertilized your tomatoes.

Oh yeah, and that doesn’t include a tractor or a plow so good luck hand-planting and weeding 150 acres of tomatoes.

Gardening is simple enough. I go out to my garden, I look at the tomatoes, I pick the ripe ones and I eat them.

Heirloom tomatoes don’t have a great shelf life. They’re only good for less than a week if you pick them when they’re ripe.

Imagine you had 3.9 million tomatoes. And if you didn’t sell them all within a week they would be worthless. I had no clue how long it would take to pick a field of tomatoes, but did find this awesome report on the internet.

Professional pickers can pick about 30 pounds of tomatoes in a minute. Which blows my mind but also makes me sad to think of migrant workers getting paid piecemeal for rapidly filling crates of tomatoes in the hot sun.

According to the article, it costs at least $1,223 dollars per acre to harvest tomatoes. So to get our 3.9 million tomatoes, we’d need to pay $183,450 to have the tomatoes harvested.

Headscratcher #5: The economics of selling tomatoes

At this point, we’ve spent about $400,000 for 3.9 million tomatoes assuming that we have 100% germination of seeds and 0% spoilage of tomatoes. But here’s where things get really interesting.

3.9 million tomatoes weigh about a 1.5 million pounds. An “average tomato” from my garden weighs about 0.4 pounds.

If you went through with the plan this far, you’d have to sell 1.5 million pounds in less than a week before they spoil. My town has a robust Farmer’s Market and a population of about 250,000 people.

You’d need to sell each man, woman, and child in my town 6 pounds of tomatoes. Without interviewing the people I meet at the farmer’s markets, I’m guessing they don’t sell 1.5 million pounds of tomatoes in a day. 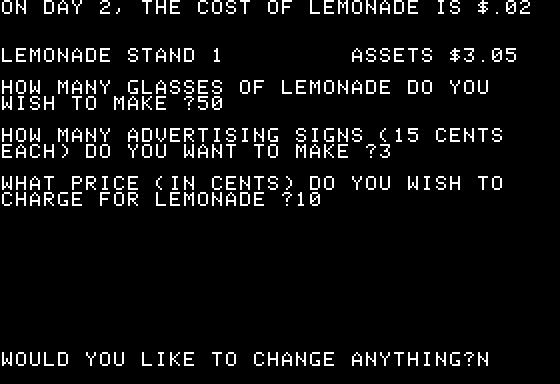 Well this tomato plan is exactly like that game. If you bought too much sugar and can’t sell that much lemonade the flies come and literally eat your money.

There’s no way anyone other than a seasoned farmer is selling 1.5 million pounds of tomatoes.

I’m pretty sure I’m an idiot.

I mean, who else would write 1,700 words about a really dumb Tweet that is probably going to inflame a giant audience.

But it was important for me to write it.

I am a blogger. My blog is about finance, but it’s not financial advice. Mostly I’m just some random dude with a laptop.

I enjoy reading about personal finance on the internet. But I’ve never read a blog post that changed my life or my money strategy.

So if you are a content creator, are you selling entertainment or actual financial advice? Are your readers clear about which one you’re selling?

And if you are a content consumer, are you paying for entertainment or financial advice? Are you clear with yourself about the dollars you’re parting with? Are you okay if it turns out like a bad day on lemonade stand?

And for heaven’s sake, can we all just have a little bit more fun? I’m so tired of serious stuff. Does inflation matter if you’re frugal?

Does inflation matter if you are a frugal family? I examine our spending over the past 3 years to look for evidence of inflation. GovernmentWorkerFi.com turns 1 today. Check out my blogaversary post where I share insights from my first year of personal finance blogging.